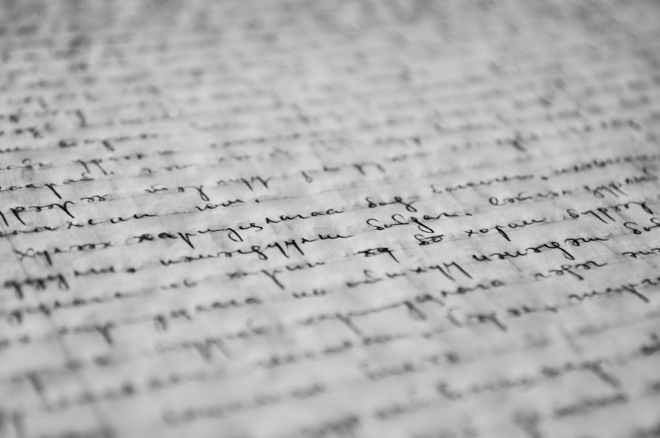 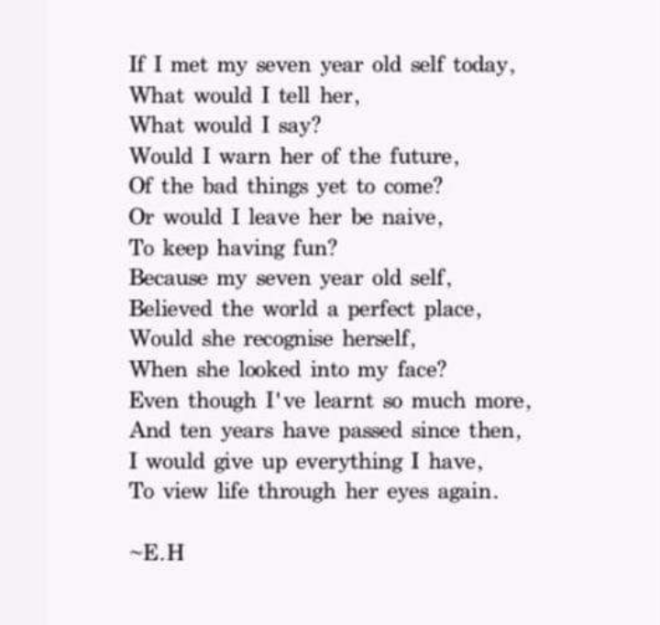 Well, ten years later, I’m not quite sure. But maybe I have an idea.

See, seven year old me was innocent, creative, bossy, and set in what she wanted to do. She didn’t see the hurt in the world, or the pain, or the evil. She saw (and tried to do) only good.

The seventeen year old me isn’t nearly as innocent. My creativity has turned into an unlimited imagination that can create worlds, and people, and places. I’ve learned that bossy isn’t how to handle every situation, but I’m still sure of what I want to do. I have witnessed the hurt, the evil, the pain. Maybe I’ve even caused some… But I am fighting against it to make the world a better place. I’ve seen and felt things that nobody should have to, and I want to help as many people as I possibly can.

So, what would I say? Here is my letter to my past self:

“Age is just a number” is something that we will hear throughout our life, especially as we get closer to eighteen. And it really is, to a point. Age doesn’t define maturity, or when you get your license, or a boyfriend, or when you’ll have that closet full of clothes you want, or a corvette. And that’s exactly what you expected to have at sixteen, or at my age, seventeen. But, age really is just a number.

See, we’ve changed so much from where you are now. I don’t want the short skirts, or the boyfriends, or the expensive car. I have a cell phone and I hate it. And the maturity? Oh hun, I may be responsible, but maturity is out the window for us.

You were so serious for so long that you had no idea how much fun it is to be not serious… To just go out and have fun, to not be a stick in the mud. Yeah, I still have serious moments, but I learned that it’s okay to cut loose and let my hair down.

I remember how you really wanted to be popular, too. But we’re not popular in the future. I have (maybe) four or five friends… But those four or have friends? They are my everything. They’re supportive, fun, easy going… I wouldn’t trade them for the world. As you aged, you realized that you didn’t need seven hundred people to sort of like you, you only wanted a few to love the real you. I live by this.

You have always known how to love, though. Always. I’ve learned how to love everybody by now, but even during your reign, you still loved deeply. And we haven’t changed that yet. God willing, we never will. This loving thing has hurt us, well, me… And it will hurt me again… But we’ve grown. Now I’ve seen the darkness, the evil. And, I’ve taken a stand against it. We are fighting to help people live through another day because we witnessed someone who couldn’t… And that will live with us to the end.

Much to your disappointment, I’m sure, we did go through a self loathing phase. We aren’t quite out of it, either, but we are working on it. You see beauty in yourself, now, and not in everything except you. And that’s amazing.

I still write. I know you did, too, but I still do it. You really started me off on it. And I sti have the creativity. It’s just morphed into a large imagination, where I can create anything I damn well please. We haven’t lost that yet, either. And as long as we keep it, we will always see the beauty in life.

I wish I could have kept more of you with me, though. You always wanted to be older… And, now, I think I know why. You thought you would be unstoppable. And you never were stopable, and we sure as h*ll aren’t now. But we need to work on seizing the day, and going forward no matter how terrified we are. I need to work on that. So in ten years, twenty-seven year old us can look back and say that we bettered ourself. I wish I could have held onto the innocent look on the world… But now, I can help people see the good despite the bad. I’m truly better for it.

This is one girl’s madness.

TheCollegeFever - A Personal Companion for Students